An engineer was killed and another employee was injured in Iran’s Parchin military complex Wednesday, the Iranian defense ministry said.

Parchin, located south of Tehran, has been tied to Iran’s missile production work and nuclear research. It has been the site of a number of mysterious blasts in the past, which some have suggested were engineered by Iran’s foes.

Iran’s Defense Ministry said the ostensible accident occurred on Wednesday afternoon at a research center at Parchin. It did not elaborate on the cause of the accident or provide any further details.

“On Wednesday evening, in an accident that took place in one of the research units of the defense ministry in the Parchin area, engineer Ehsan Ghad Beigi was martyred and one of his colleagues injured,” the ministry said in a short statement. “Investigations into the cause of this accident are underway.”

The complex is alleged to have hosted past testing of conventional explosives that could be used to detonate a nuclear warhead, something Iran has repeatedly denied.

The site came under renewed scrutiny by the International Atomic Energy Agency in 2015 when Tehran reached a landmark deal with major powers under which it agreed to curb its nuclear activities under UN supervision in return for the lifting of international sanctions.

Iran had previously denied the IAEA access to Parchin, insisting it was a military site unrelated to any nuclear activities, but the agency’s then chief, the late Yukiya Amano, paid a visit.

In June 2020, a gas tank explosion in a “public area” near the complex shook the capital, 30 kilometers (20 miles) away, but caused no casualties, the defense ministry said at the time.

Iran’s nuclear program has been the target of a campaign of sabotage, cyberattacks and assassinations of key scientists that it has blamed on Israel.

Other explosions and fires occurred in in Parchin in 2014 and 2007.

The latest incident comes days after a senior Iranian Revolutionary Guard Corps member was fatally shot by two gunmen on motorbikes in the middle of Tehran.

The killing on Sunday of Col. Hassan Sayyad Khodaei bore the hallmarks of previous deadly shooting attacks in Iran blamed on Israel, such as those targeting the country’s nuclear scientists. 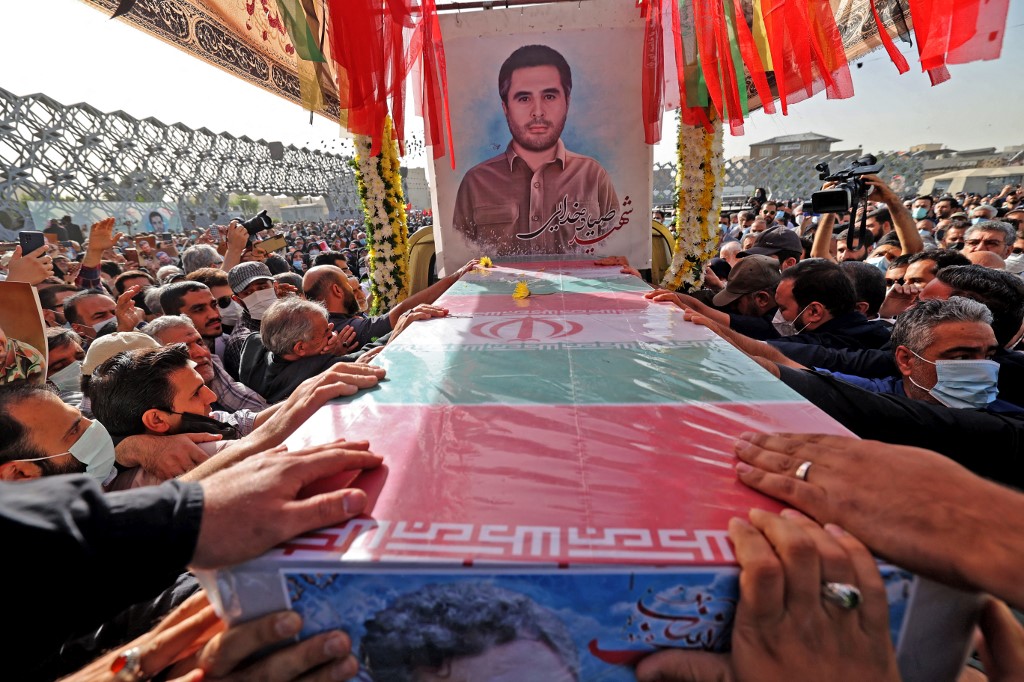 Mourners gather around the coffin of Iran’s Revolutionary Guards colonel Sayyad Khodaei during a funeral procession at Imam Hussein square in the capital Tehran, on May 24, 2022. (ATTA KENARE / AFP)

Reports in Hebrew and Iranian media said Khodaei had planned kidnappings and other attempts to attack Israeli and Jewish targets worldwide and was in charge of recruiting drug dealers and other criminal entities to carry out the attacks.

On Wednesday an unnamed intelligence official told The New York Times that Israel had told US officials it was behind the assassination, in an effort to warn Tehran against the continued work of an alleged covert unit he helped lead.

Two people affiliated with the IRGC told the Times that Khodaei played a key role in the transportation of drone and missile technology to Iran-backed militias in Syria and to Hezbollah fighters in Lebanon. He also served as a tactical adviser to the Syria-based militias.

Israel, which has made no official comments on the incident, has reportedly raised the security alert level at its embassies and consulates around the world, fearing a retaliatory Iranian attack.