The Pittsburgh Steelers won’t have defensive end Stephon Tuitt moving forward as it was announced on Wednesday that he is retiring from the NFL. The fact that this announcement is being made on June 1 probably shouldn’t come as a huge surprise, however, and that’s because that date might have been a line in the sand that both sides had when it came to a decision for the 2022 season. With Tuitt now retiring, let’s look at what the impact on the Steelers salary cap situation should be.

For starters, Tuitt’s retirement isn’t likely to be processed until after June 1. That’s a big deal when it comes to dead money acceleration. Assuming that Tuitt’s retirement will be processed post June 1, the Steelers will initially save $9,048,560 in 2022 cap space ahead of top 51 roster displacement taking place. With Tuitt retiring after June 1, the Steelers would also have a dead money charge of $4.755M in 2023. That amount defers because of the date being post June 1.

Now, while I have not seen Tuitt’s actual contract, I would speculate that the Steelers could go after some of that previous signing bonus money if they really wanted to. I kind of doubt that will happen, however. If it does happen, we won’t know about such a thing happening for quite a while. In fact, the outcome of a grievance by the Steelers against Tuitt, if one was filed, probably wouldn’t get resolved for several months. In short, if the Steelers won such a grievance, the refund probably would not happen until 2023. We shall wait and see.

So, with Tuitt retiring, and assuming it is processed after June 1, where would that put the Steelers at from a salary cap perspective?

Now, a post June 1 retirement of Tuitt could have a big ripple effect. In short, Tuitt’s retirement might result in the Steelers not needing to restructure the contract of outside linebacker T.J. Watt later in the summer and especially if the team signs safety Minkah Fitzpatrick to a contract extension that results in his 2022 salary cap number dropping a few million. Such a scenario is quite possible as we sit here right now. We shall see what ultimately happens with wide receiver Diontae Johnson and his contract. Personally, I kind of doubt he will get an extension, but we’ll see. An extension for kicker Chris Boswell could happen as well. If it does, it won’t really tax the Steelers 2022 cap situation.

While it is only educated speculation on my part, the Steelers should have around $5-$6 million in salary cap space that they can use to beef up their 2022 roster between now and Week 1 of the regular season. Obviously that number can grow if they are willing to restructure Watt’s contract later in the summer. While I think we could see the Steelers beef up their roster a little more going forward past OTAs, I don’t expect them to do make any earthshattering signings. Maybe a budget defensive lineman, outside linebacker or tackle? Or maybe one of each. $6 million in cap space can go a long way based on the way the Steelers normally do business past June 1.

The Steelers still have two draft picks to sign in quarterback Kenny Pickett and wide receiver Calvin Austin III, but my numbers and projections already account for those deals. You can see the entire breakdown of the steelers current and future salary cap outlook for 2022 below.

The steelers entered Wednesday with an 89-man active roster. Once Tuitt is processed as retired, they will be down another player. In short, the team will be signing a few more players real soon and it’s a good bet that both will be defensive players. 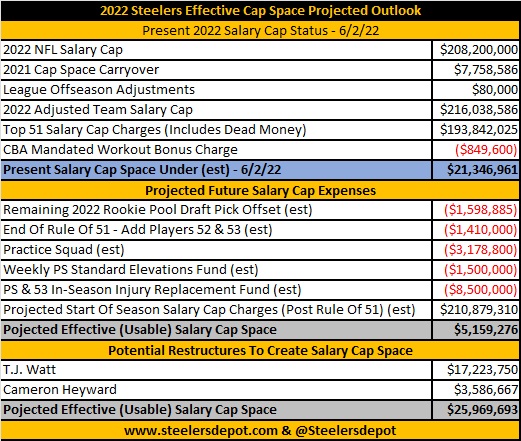